Summer is coming to an end, and that means many people and myself are heading back to school. Yippee… That also means I’m starting my last year in high school in about a week, just a few months away from going to college. Weird feeling, it is.

Looking back at my time in high school, I wasn’t really one to join clubs or do sports like other people… does the “going-home-right-after-school” club count? If so, that was the best club experience I’ve ever had.

I did have a crack at my school’s Debate Club a couple years ago and missed my chance to run track since people tend to say I’m a pretty fast sprinter, but I just never found any extracurricular activities that really interested me in the long run or even in general. The combination of me being pretty lazy and not really being a social person overall, that’s one of the few reasons why I didn’t pursue any clubs and such.

But that doesn’t mean I didn’t want to join anything. I feel like it was more like nothing at my school actually caught my eye, and even though I was pressured so much during my time at school to do extracurricular things to make it look good on your college applications and such, I’d rather not join something I really don’t give a shit about doing/am not passionate about. But I am planning to try out for the track team this year because somehow I’m able to get a 100m sprint time that’s lower than the average. Plus, I actually find sprinting fun.

That being said, there have been a lot of anime I’ve seen that take place in a school setting, and some that even feature the characters joining/being a member in a particular club. Today, I’d like to discuss some school clubs that I would be interested in joining if I had the opportunity!

Now I’m not a chuunibyou, at least that’s what I think after Irina from I Drink and Watch Anime recently helped me determine if I am or not. So you would wonder why I would want to join a club like this.

Well, technically this IS also the napping club thanks to Kumin and how she somehow made her dream come true to make a club where she sleeps at school. What a coincidence because I also love napping and I basically took a nap almost every day during my summer vacation, so the thought of being able to keep napping at lunchtime and/or after school sounds heavenly.

I wouldn’t necessarily participate in the chuunibyou-related activities members like Rikka and Dekomori tend to take part in, but they still seem like a pretty friendly group to be around. I think I’d basically be an Isshiki-type of member… just with a full head of hair.

Yes, I am fully aware that I’m male and Ooarai is an all-girls academy but when I was compiling this list, I was putting the kind of person I am and my overall personality in consideration rather than gender… does that make sense? So just don’t assume that I’ll manage to become the first dude to join this club, I’m speaking on more general terms.

Anywho, if you don’t know what the anime Girls und Panzer is about and the sport of “sensha-do” is, it’s essentially an all-female competitive school sport where students fight in a war-style scenario and battlefield with actual military-grade tanks. Yep.

I don’t want to go too deep into what all this is about, you can read more about this show in my review on #moe404, but there are definitely some general things I’ll briefly explain. Despite the ammunition and tanks being as real as it gets, nobody dies while doing this sport (somehow) and apparently the local folk who peacefully live their lives are completely fine with the tanks demolishing their homes during matches since the government pays for the damages. While this sport totally sounds like it can be a real thing… it’s actually not a bad way for students to gain more confidence in themselves and make them feel like they can do a lot in their lives after competing in an extremely intense and strategic sport like sensha-do. I would consider myself someone who doesn’t have a lot of confidence so I feel like this sport would help me in that field.

As I’ve mentioned before, I don’t like kids. I don’t know how to interact with them, I’m terrible with trying to calm them down, I’m deathly afraid of dropping them when I manage to hold them in my arms, I’m bad with kids in general. And even after like six years of having younger cousins that I see frequently, I just haven’t gotten a grasp at comfortably being near little children.

That’s pretty much why I picked the babysitting club from Gakuen Babysitters. I legit want to be better with children and I feel like being around someone like Ryuuichi who has lived with a little brother most of his life, I would definitely learn the ropes from a more experienced guy (he’d also be a pretty nice friend to have). I’d assume it’ll get pretty hectic with the other kiddos like Taka and Kirin but it’s all a part of the process.

Plus, I’m pretty sure sometimes taking care of someone as chillax as Kotarou will give me a small yet valuable chance of relaxation and bliss in this crazy type of club. 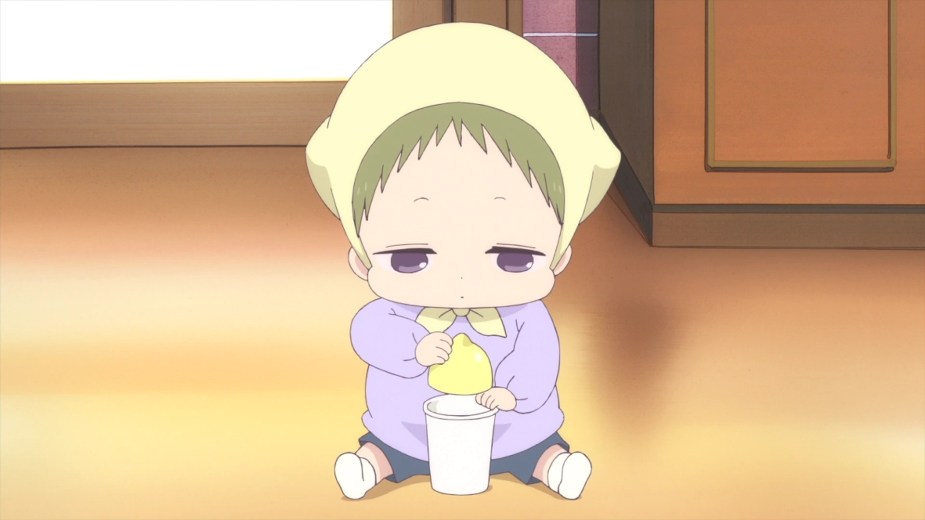 I know about those memes about how people now have the urge/interest to go camping after watching Yuru Camp, but come on, literally doing nothing and relaxing near a fire and some food sounds like an amazing time to me!

My family and I never were ones to go camping or anything like that. I’m not sure why but that’s just how I grew up. But as I am getting older and gaining the urge to try new things, going camping doesn’t sound like a bad idea to at least attempt. Especially with this particular group of people of Rin, Aoi, Chiaki, Ena, and especially Nadeshiko, they would definitely be some great company to be around and to learn from. Oh, and it would a blessing to be comfy with Chikuwa.

As you may know, I really like music. Specifically the rock genre since as you can see from my various album reviews and my recent J-music suggestion post, they’re usually really nice rock bands. And while I’m not as good as most talented people out there, I enjoy playing and learning various songs on the guitar from bands of all sorts, not only Japan-based ones.

That being said, I feel like the light music club would be the most realistic choice and one I’d have serious interest in joining. Due to my laziness, I haven’t really practiced the advanced guitar techniques such as finger-picking but joining a club like this one would definitely motivate me into playing the guitar more and get better at it (that is, if I don’t get mesmerized by Mugi’s sweets and tea easily or Yui’s lazy vibe rubs onto me).

In addition, I’ve started to gain a big interest in trying out other instruments such as the bass and drums, and hopefully Mio and Ritsu respectively would let me take a stab at them. I also think that, like the Camping Club, this would be a fun group to be a part of; being close friends, being silly every single day, and making really nice music together.

And hey, you get free sweets and tea. How can one deny an opportunity like that?!

So yeah, that’s all I wanted to talk about today!

Hope you enjoyed this little list. There are definitely some clubs in anime that can at least pique your interest, and I’d love to hear some of your favorites. So by all means, leave them in the comments below!

NATCHAAAAAAAAAAN 🥰 #lovelive
this clip is amazing lmao #lovelive
I just want to say I love all nine of these people, and also TOMORI GOT A BOB HAIRCUT 😊 #lovelive
happy birthday Kasumi!!! 🥳 #lovelive #中須かすみ生誕祭2020
poor Pile, just trying to get the attention of some otters (taken from @/hitomi_komatani on Twitter) #lovelive
hello #lovelive